Solid accounting was the basis of success from the very beginning

Philipp Jakob Wieland was not only a profound bell founder and resourceful entrepreneur. He was also a conscientious and meticulous accountant. He made sure that his company had a solid business foundation right from the start.

The oldest preserved document showing the founder's economic thoroughness is the "Cassa Book" , the cash book of 1822, which carefully lists all income and expenses of the still young company for the period from June 1822 to December 1823.

This gives an impressive insight into the early days of the company, the number of employees, the amount of raw material processed, and the product range. It can be seen that Wieland employed just one skilled worker, one helper and occasionally several day labourers - as well as two maids in the household. Between 1 and 1.5 tons of brass, copper, zinc, tin and lead were processed annually. 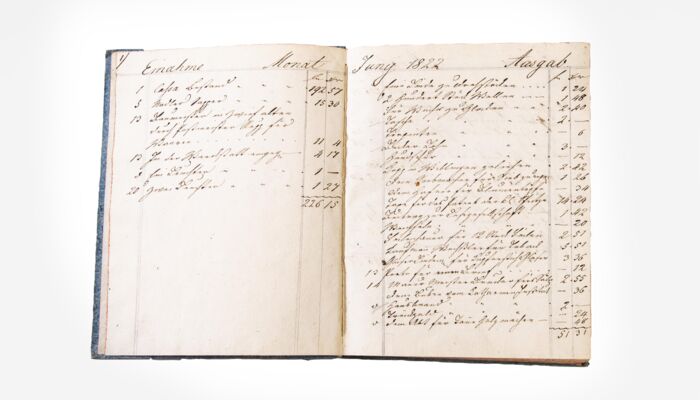 The first impression is deceptive: Philipp Jakob Wieland not only records sales on the left, but also his working capital in the first line as a carry-over from the previous month. 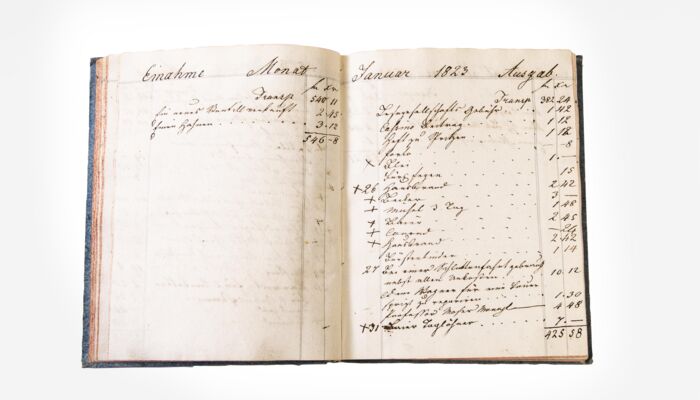 The cash balance of 540 guilders and income of about 6 guilders were offset in January 1823 by liabilities and expenses of 425 guilders, including 7 guilders for "day labourers".

Income from bells can be found repeatedly, for example 5 guilders and 36 kreuzer on 10 August 1822. Philipp Jakob Wieland, however, already made significantly more revenue from new products, such as weathercocks, irons, hand syringes and stirrups. The "Cassa Book" is therefore also testimony to how much the company's founder focused on diversifying his range of products right from the start. And it shows that the lion's share of revenue was achieved with beer pumps and fire extinguishers.

But the records also give an idea of how difficult the first few years were. Again and again Philipp Jakob Wieland had to take out loans from his father. And again and again the months end with a "black zero", at the end of August 1822 only 5 of the original 736 guilders were left in the till.

It is no wonder then that the company founder and his family remained living in the modest apartment directly above his company for decades. It remained just as natural for him to keep a proper record of his business throughout his life. Later, after the company had grown, this was done in large-format, thick order books. Many of those have been preserved - and still allow us to trace Wieland's development into a large industrial company in detail. And they show that conscientious accounting was just as important for the company's success as the many technical achievements.

From 1862 onwards, impressively voluminous "order books" were required to record all business transactions in detail.