To the top with hot rolling technology

Vöhringen becomes a specialist for strip and sheets

From 1895, the consistent expansion of strip and sheet metal production at the Vöhringen plant began. The first steam operated rolling mill was built. The hot rolling process also made it possible to produce much wider strips.

The expansion of the Vöhringen site into one of the largest rolling mills in the world actually began as early as 1891, when a new foundry was built there so that the cast plates no longer had to be laboriously transported from Ulm to Vöhringen. This was followed just four years later by the construction of a new rolling mill, Building 9. The fact that its roof truss was made of metal and covered with corrugated sheet proved to be a wise decision – after all, the wooden roof truss in the older rolling mill 2 burned out in the same year.

Much more important, however, was another innovation: the rolling mill was no longer powered by water but by steam. An investment that was essential for further expansions and productivity increases. Consequently, not only the boiler house was enlarged in the following decades, but also the building itself, until it reached its current size in 1929.

The rolling machines were set up in groups to be driven by one shaft. While the rolling speed was initially 30 metres per minute, it doubled on newer machines from 1900 onwards. A trio roll stand was also used from the stock of the Augsburg company Beck, which Wieland had bought in 1893 and dissolved in 1896. In 1899, a new sheet metal cutting shop with an attached distribution depot was also built (Building 13).

In 1929, a new strip rolling mill (Building 33) was built, impressive 90 metres in length and 30 metres in width. Here, for the first time, strips 400 or even 600 mm wide were to be produced using the hot rolling process. In addition to larger cast slabs, this required wider starting material. In order to be able to hot-roll them, a new, high-performance hot-rolling mill from the manufacturer Achenbach was installed in Building 9 in 1929, which could process slabs measuring 62 x 90 x 10 centimetres at a speed of 160 metres per minute. In 1932 the machine was supplemented by the first front roller especially for wide strip. On this basis it was now possible to roll strip with a width of 60 centimetres – a dimension which would soon become a standard format. The Vöhringen plant soon developed into one of the largest rolling mills in the world. 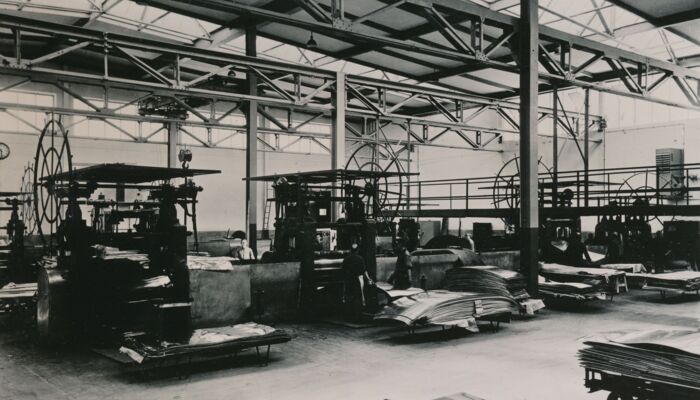 On the early rolling mills, the rollers were still adjusted by means of a hand wheel. The canopies protected the sheets against dirt. 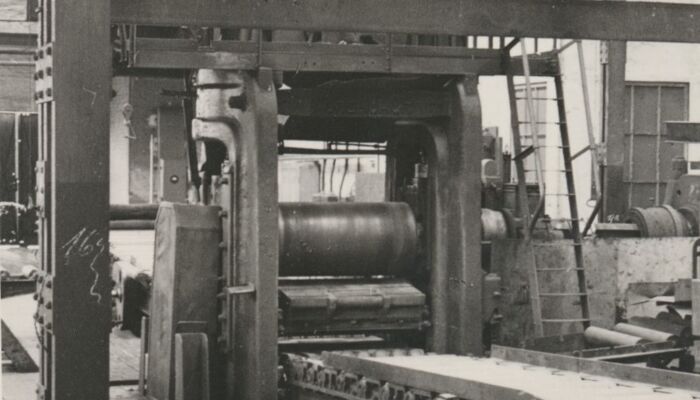 In the foreground is the sheet metal cutting shop built in 1899, behind it the brass rolling mill from 1895, and the tower of the strip annealing furnace is clearly visible.