Reliable helpers during the "cucumber season"

A stroke of luck: the commercial manager Gottlieb Matthäus Stahl

For more than four decades, the businessman Gottlieb Matthäus Stahl held management positions at Wieland. After the death of the founder, he was an important support for the widow Mathilde Wieland and helped her steer the company through difficult economic times.

After the foundation of the German Reich in 1871, the economy initially enjoyed a strong upswing. However, the "founding boom" also brought overheated speculation and overcapacity, which led to the so-called "founding crisis" as early as 1873, triggered by slumps on the stock exchanges in Berlin and Vienna. The downturn lasted until the end of the decade and mainly affected the coal and steel industry and mechanical engineering – and thus also Wieland.

This was at the very moment when the company founder Philipp Jakob Wieland died. Immediately after his death, his widow Mathilde merged the companies "Messing- & Metallwarenfabrik Wieland & Cie." and "Feuerspritzen- & Glockenfabrikation Philipp Jakob Wieland" to form the company "Wieland & Cie.". And she granted power of attorney to her brother-in-law and long-time technical director Robert Wiegandt. She also confirmed the power of attorney for a man "who was granted it by my late husband 15 years ago": Gottlieb Matthäus Stahl, whom she also appointed as commercial manager.

Stahl had been at Wieland since 1841 and had long been an indispensable pillar in everyday business. Since 1859, he had held a general commercial power of attorney and was responsible for all commercial and sales matters – a stroke of luck for Mathilde Wieland. A letter he wrote to his boss in 1877, at the height of the "founding crisis", illustrates in exemplary fashion just how detailed he kept her up to date:

"In the months of July and August, the so-called cucumber season, it is slower every year, only this was not so noticeable in the past, as there were always 2–3 month worth of old orders in arrears, which provided enough work over this quiet time, but now there are only 2–3 week old commissions in the books and one always lives in fear whether there will always be enough orders…" He hoped, however, that after the imminent harvest, the markets would develop "demand for our household items". Apparently prices had been lowered, the new price lists would soon be ready and "the cheaper prices should also bring in some orders".

Wieland survived the "cucumber season" as well as the "founding crisis", also thanks to the long-standing commitment and loyalty of Gottlieb Matthäus Stahl. He died in 1886 after 45 years of working for Wieland. 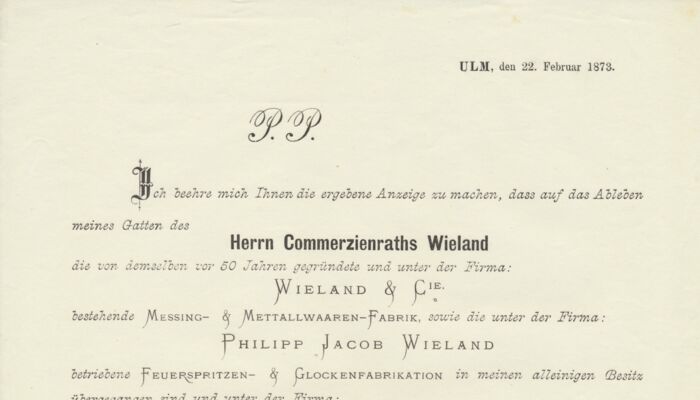 On February 22, 1873, Mathilde Wieland officially announced that she would continue the companies after the death of her husband and confirmed the power of attorney for Gottlieb Matthäus Stahl.