When manned NASA spacecrafts will take off into space again in the near future, Wieland will have made a contribution: with a copper tube coil for testing of an important pressure regulator installed in the European service module of the Orion spacecraft.

"Starship Orion" makes many people think of the legendary television series from the 1960s, in which "Flying Saucers" took the German television audience into the fantastic world of "science fiction" for the very first time. Now the "Orion Spacecraft " is becoming reality: As successor of the decommissioned Space Shuttle, NASA has launched a space program in which a space capsule named Orion plays a central role. After a few delays, the spacecraft, which is visually reminiscent of the legendary Apollo capsules, is to take people to the moon again for the first time in 2022.

What is completely new, however, is that the European Space Agency ESA is contributing an important component to Orion: the European Service Module (ESM), which is located behind the conical crew module. It houses components for propulsion, power supply, life-support systems and air conditioning. The ESM is built at Airbus in Bremen.

As with earlier spacecraft, Orion uses the principle of pressurizing fuel tanks with helium to force the liquid fuel into the propulsion and control engines. Pressure regulators that control the supply of the helium, which is under extremely high pressure, are indispensable for this. It is equally essential to thoroughly test these pressure regulators before installing them in the ESM.

In 2018, Airbus relied on Wieland as supplier of a 167-metre long copper tube coil used as a heat exchanger with particularly high heat storage capacity. This is necessary because the helium does not flow through the coil continuously but in a pulsed manner. Heat, however, cannot be recovered in the corresponding pulsation. For this reason, the special copper tube has a comparatively large wall thickness of 2 millimetres at 18 millimetres diameter.

If everything goes according to plan, Orion will fly regularly to the moon from 2022 - and later to Mars and to asteroids. Never before has a spacecraft been constructed that allows people to travel further away from Earth - and Wieland was involved in this with copper tubing for a vital pressure regulator test. 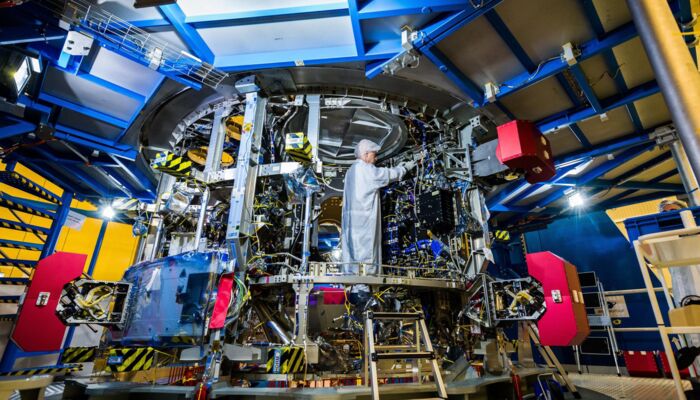 "Rocket Science": Airbus technicians assemble the cylindrical service module for Orion in Bremen It also houses the pressure regulator, which is tested with a copper tube coil from Wieland.