History and responsibility – The Wieland-Werke 1933–45

The war years of the Second World War were also a difficult time for Wieland-Werke AG, and the company has historically been aware of its responsibility during this time. As a manufacturer of non-ferrous semi-finished products Wieland was given preferential treatment by the authorities, but still had to work tirelessly for the continued existence and protection of the company and its employees.

Lina Einstein: A great name could not save her

The physicist Albert Einstein, born in Ulm, had numerous relatives in the city. From his exile, he was able to help some of them to leave the country after 1933, but not his cousin Lina Einstein, telephone operator for Wieland. She died in 1942 in the gas chambers of the NS regime.

When 28-year-old Lina Einstein applied for a job as a telephone operator at Wieland in Ulm - where her sister Anna was already working - in 1904, her cousin Albert Einstein was still an unknown employee of the Swiss Patent Office in Bern. His ground-breaking Theory of Special Relativity was not published until a year later. It not only made him one of the most important scientists of his time, but also probably the most famous son of the city of Ulm.

At least four aunts and uncles of the later Nobel Prize winner lived there at the time - and most of his 18 cousins. Among others, Lina Einstein, who worked for Wieland as a single woman from 1904 until she retired in 1937. After that, however, there was no quiet old age waiting for her - quite the opposite. At this time, the Nazi state's discrimination against Jews turned into open reprisals and soon also targeted persecution and extermination.

Her cousin Albert was by then a world-famous Nobel Prize winner - and emigrated to the USA. From there he helped relatives, friends, and former colleagues to leave Germany. Especially through letters of recommendation ("affidavits of support"), which should make it easier for those willing to leave Germany to obtain appropriate permits by means of his great name. Sometimes this was successful, sometimes not - as with Lina Einstein. Initially still supported by the Israelite community, she had to vacate her apartment in downtown Ulm after the beginning of World War II and from then on lived in a Jewish old people's home in Oberstotzinger Schloss.

Albert Einstein's letters of recommendation for his cousin Lina are not preserved. However, a letter to a "dear cousin" dated 23 October 1941 and preserved in the city archive of Ulm could refer to her. Disillusioned, Einstein stated: "Under the prevailing circumstances, I unfortunately see no possibility of getting them out of Germany. It's just that they've waited too long." In 1942 Lina Einstein was first deported to Theresienstadt, from there she was taken to Treblinka, where she was murdered in the gas chamber immediately after her arrival on 28 February 1942. Four other cousins from the family also did not survive the Holocaust.

Albert Einstein never set foot in his birthplace again. His cousin Lina Einstein is commemorated today by a "stumbling block" in the market square in Ulm.

With this letter, Lina Einstein applied for a job as a telephone operator on 27 May 1904. Two weeks later she received her employment contract, the monthly salary was 100 marks.

The photo of Lina Einstein (3rd from left) and her colleagues from the telephone exchange newly set up in 1904 is part of her personnel file, which is still held in the Wieland works archive.

With the deportation, Lina Einstein's assets were "confiscated for the benefit of the German Reich". Wieland was asked to stop making further pension payments "to the Jewess." 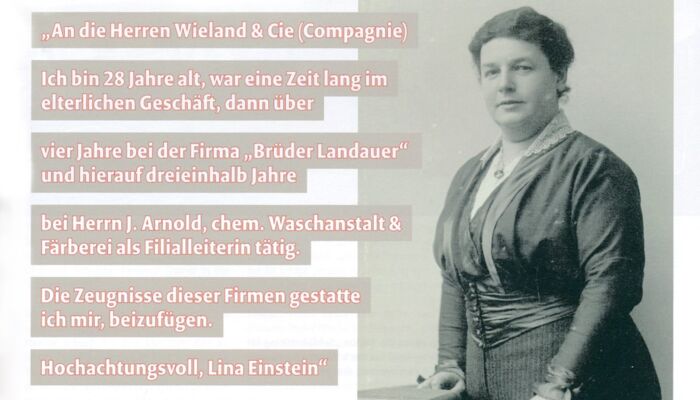 Lina Einstein was commemorated in "Wieland International" magazine in 2015. And there is a "stumbling block" set by the artist Gunter Demnig in front of her former home in Ulm's market square.