From crisis case to gem

The Langenberg Copper and Brass Mill

The Copper and Brass Works Langenberg - trading under this name since 1928 - often changed hands before being bought by Wieland in 1987. The plant was of interest to Wieland because they had mastered the rolling of pure copper. Since 2001 it has been fully integrated into the Wieland Group.

The origins of the company date back to before the First World War, when the brothers Friedrich and Benno Barmé founded a semi-finished product factory in Langenberg near Düsseldorf. Between 1914 and 1918, it mainly produced grenade detonators – a product that had no future after the end of the war. For this reason, the brothers decided to produce rods, strips, tubes, profiles and wires made from copper and brass and founded the “Kupfer- und Messingwerke AG Langenberg” in 1920.

Although the portfolio was expanded to include rolled lead and lead pipes in 1920, the company went into economic difficulties during the hyperinflation of 1923. The industrial magnate Hugo Stinnes acquired the company – but died shortly afterwards. Within a very short time his huge company empire, consisting of several thousand holdings, collapsed. The Copper and Brass Works Langenberg were bought back by the Barmé brothers in 1928. In 1932, they already produced seven tons per day, started production of nickel silver and, from 1935, Platia, which is a steel plated with brass.

The good business developments could not prevent the Jewish owners from being forced to sell the company in 1938, which a little later specialised in the production of round blanks and cups for ammunition. After 1945, Benno Barmé demanded the return of his company, a process that lasted until 1957. He won the Westdeutsche Allgemeine Zeitung (West German Newspaper) as urgently needed investor with a stake of 50 percent.

In addition to many other innovations, the company succeeded in processing pure copper materials as rolled material. Wieland had not used this technology until then and this was the decisive factor for the acquisition of the company in 1987. Two years later, for antitrust reasons, the US company Olin became involved in the renamed “Langenberg Kupfer- und Messingwerke GmbH & Co. KG”. The company increasingly produced transistor strips and lead frames, and later hot-dip tinned, traverse wound or milled profile strips were added. The eventful history of the company ended in 2001, when it merged with Wieland-Werke AG. Today, around 300 employees produce high-quality strips from copper and copper alloys at the Velbert-Nierenhof site. 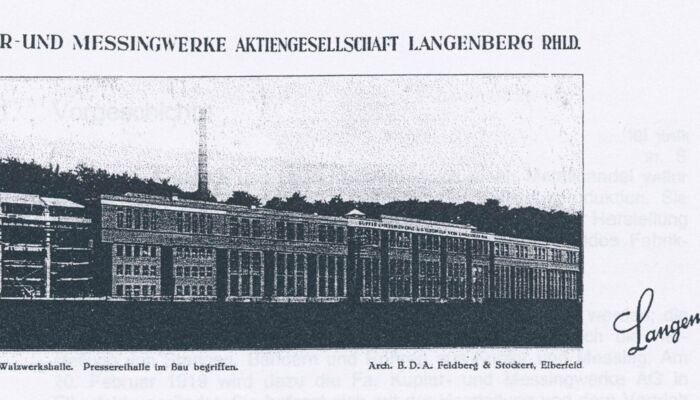 The Langenberg plant celebrated its 75th anniversary in 2003. After an eventful history, the company has found a promising home as part of the Wieland Group.