"Fake News" in the olden days

Not every picture tells a true story

Manipulating and beautifying photos is not an invention of the Instagram age. Long before Photoshop, a resourceful photographer created a photographic idyll that corresponded quite typically with idealized wishful thinking - but is undoubtedly "fake".

It is an image that appears in many treatises on the history of Wieland or the life of Philipp Jakob Wieland. Even in the foyer of the headquarters in Ulm, the photograph can be seen in impressive format: The company founder sits on a simple wooden box in the courtyard of his company, mid-picture and surrounded by his employees, by gentlemen in fine suits as well as by simple workers including a young apprentice.

As if accidentally dropped and set down, we see various company products, taps, water pipes, boilers - but surprisingly also sculptures with an antique appearance. The most important feature of the photo, however, only becomes apparent on closer inspection: the patriarch in the middle of the picture, coming across as energetic as well as kind, is far too big. Although sitting down, he towers above his colleagues standing beside him.

The solution to this riddle was revealed through an inconspicuous cardboard box in Wieland's corporate archive in Ulm: it contained a photograph of the same scenery – but without Philipp Jakob Wieland! The latter is only visible in another photograph and was therefore obviously inserted into the picture at a later stage.

It remains unclear when the original and the "fake picture" were created. There are indications that the version with the company's founder saw the light of day in 1937, when a large Wieland book was in the planning. It is certain, however, that the insertion of the boss must have been done with great effort and manual skill. Digital methods of sophisticated image processing were not even conceivable at the time.

The fact that Philipp Jakob Wieland emerged a little too big from this laborious handiwork may well have been intended. After all, the obvious purpose of this "fake news" is to show the founder as an outstanding personality among satisfied employees. This image may well be true to its statement – but it was never captured in a picture. 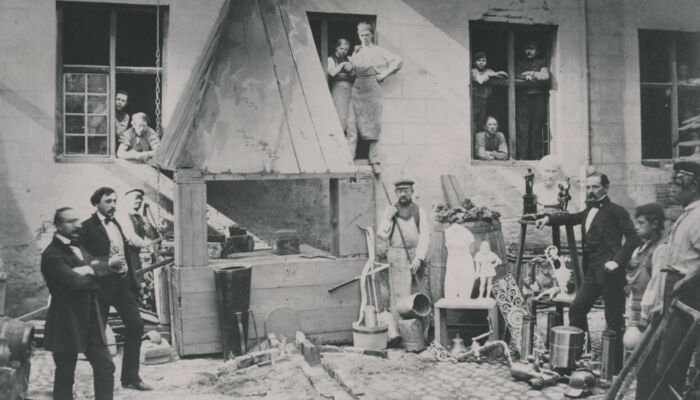 Original and idealized composition: The difference is easy to recognize: the oversized company founder sitting in the middle of the picture. 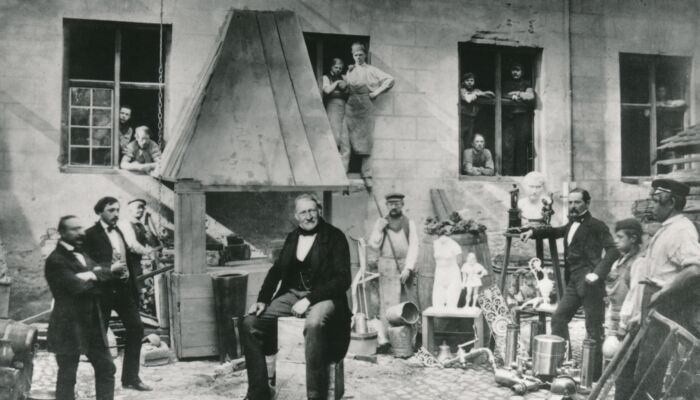