A 1913 Wieland brochure provides a long list of "welfare institutions". It served the recruitment of workers and also an "important and high good: social peace! To this day it is an impressive document of Wieland's above-average social benefits.

In 1913 the guild of merchants "Hansabund" published a voluminous anthology for trade, commerce and industry on the occasion of the 25th throne jubilee of Emperor Wilhelm II. The title of the work: "The voluntary social care and welfare institutions in industry, trade and craft in the German Reich". One article dealt explicitly with the company "Wieland & Cie.“, brass works in Ulm.

There were several reasons why Philipp and Max Wieland had this text reprinted as a four-page brochure: As a signal to the labour movement and the trade unions, they stated that this was done "only as an effort to show that in reality the relationship between employer and workers in industry is not dominated by the spirit of exploitation and oppression...".

But it's just as true that the German economy was booming and industrial workers were in great demand, especially in the rural surroundings of Ulm. The brochure was therefore also a targeted advertisement tool to recruit workers. It begins with a reference to the company's almost 100-year success story, and leads to the following conclusion: "In line with the company‘s development, its welfare institutions have also gradually grown from the case-to-case charity practiced originally ".

This is followed by an impressive list, ranging from payment by instalments for work clothes and a canteen offering breakfast, lunch and dinner (including beer!) to Christmas bonuses, wedding and confirmation gifts, seniority bonuses, pensions and widow's pensions, the provident fund and "hygienic facilities" such as first aid rooms, bathhouses or washrooms, and changing rooms. Under "Miscellaneous" a "recuperation leave under continued payment of salary" can be found, which of course was only granted to employees and "special workers". Housing assistance takes up a great deal of space, and here, among other things, the successful attempt is reported to help build small workers' houses and to sell them to workers at cost price.

Whether the brochure attracted new workers cannot be said. One year after its publication, an event of world historical importance changed all personnel planning: the shots fired in Sarajevo triggered the First World War. It certainly remains an impressive example of early employer branding. 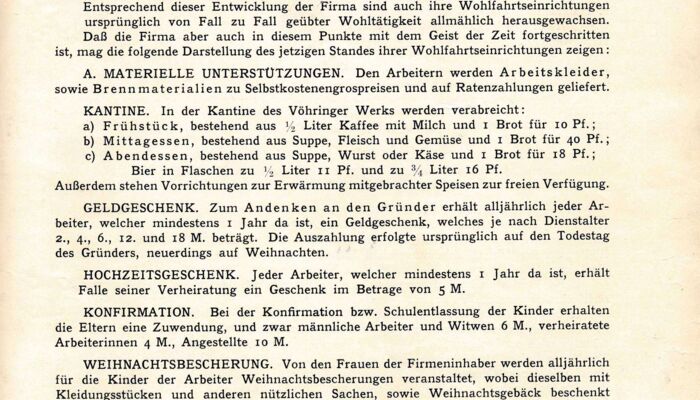 In 1900, an impressive new building was erected for the canteen and bathing facilities at the Vöhringen plant. In 1913, a lunch consisting of soup, meat, bread and vegetables cost about an hour‘s wage. 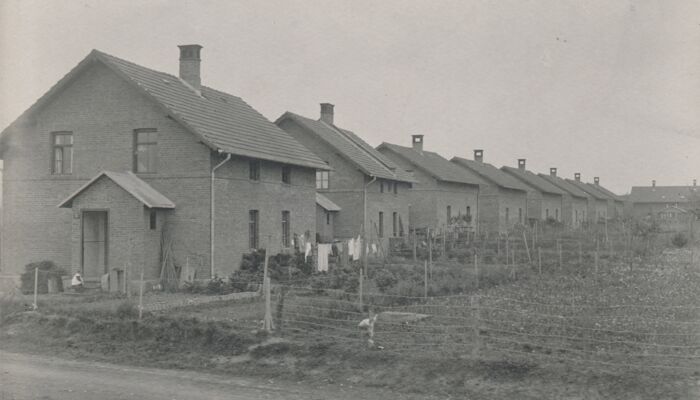 Workers' residential building in Vöhringen around 1900. Especially the semi-detached houses with a small garden were in great demand. Some could be acquired by the workers thanks to cheap loans.