Wieland opens the first slitting centre in the USA in 1980

Wieland achieved first market successes in the USA with outstanding quality. Setting up its own service company achieved shorter delivery times and increased flexibility – especially since the Wheeling/Illinois plant would later be expanded into a rolling mill.

Since the 1960s Wieland had intensified its international activities by opening sales offices in numerous European countries. In 1969, the step over "the big pond" was taken and a sales office was opened on the US East Coast. The handful of employees had a hard time in the beginning, most potential customers had their established suppliers. Harald Kroener, who later became Chairman of the Board of Management, remembers: "We simply said, now we roll up our sleeves and call everyone we know - and there were very few - and try to find names we don't know yet - and there were a lot of them. It was just diligence work."

It was a very American product, of all things, that made it easier for Wieland to enter the US market: door knobs made of brass, which were widely used there instead of door handles. Simple products actually, deep-drawn from strip material, they place special, sometimes contradictory demands on the material: it must be hard for reasons of stability - and at the same time soft enough for forming. The optically perfect surface should also have good polishing properties. Wieland strips met these properties perfectly. The superior Wieland quality therefore slowly but surely prevailed in the USA.

However, the long transport routes and times, which amounted to several weeks and thus represented a competitive disadvantage, remained a problem. This let to a consistent and courageous step: In 1980, Wieland opened the first production facility – a slitting centre – on North American soil in Wheeling, just north of Chicago. This made it possible to react faster and more individually to customer requirements.

A further step in this direction was taken in 1987 when the Wheeling site was expanded to include a rolling mill. This increased the vertical range of manufacture on site, as rolling and annealing can be used to change not only the thickness but a whole range of material properties. It is now possible to react even more specifically and quickly to customer requirements.

The rolling and cutting mill in Wheeling is firmly established on the US market. With 120 employees Wieland Metals Inc. supplies customers not only in the USA but also in Canada and Mexico with high-quality strip and sheet. Thanks to the acquisition of the American market leader Global Brass & Copper in 2019, the range of Wieland rolled products for the local market will significantly expand further. 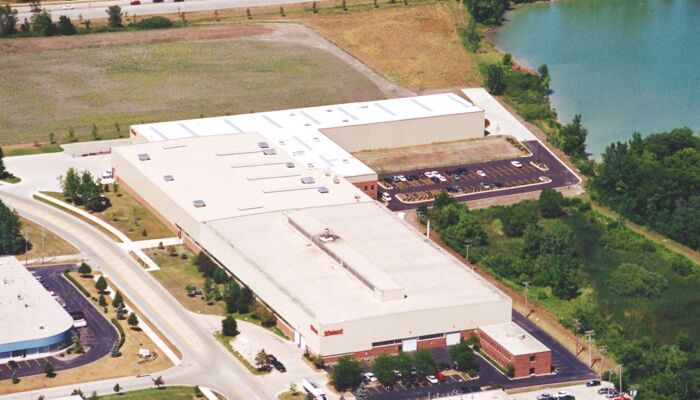 The production area in Wheeling has now grown to over 20,000 square meters. In addition to strip and sheet, the portfolio also includes surface finishing and services.