A book that speaks volumes

A magnificent catalogue was badly damaged in 1945

The Wieland Archive contains a voluminous catalogue book from the late 19th century. It tells a dramatic story without words – about how elaborately the book was once produced, about the destruction in World War II and about the fact that Wieland made a new start after 1945.

At first, it is the enormous weight of eight kilograms of the large-format volume (60 cm long, 44 cm deep and 7 cm high) that is striking. Unfortunately, the cover of the book is badly damaged and the embossed title cannot be deciphered.

The weighty volume should only be opened with great care, the thick pages appear fragile, some of them are already beginning to come loose from the binding. And they show clear traces of fire and water damage. Once the first, completely charred and illegible pages have been turned over, it becomes obvious what lies before us: a magnificently equipped catalogue presenting a large number of Wieland products in elaborate colour lithographs. Without text and each facing a deep blue coloured interstitial page. Plungers and bowls can be seen, taps, candlesticks, candelabras and bowls. However, some pages are so badly damaged that nothing is visible anymore.

The products suggest that the book was produced before 1900. The huge format and the elaborate pictures suggest that the work was not a mass advertising medium. Perhaps it was a deliberately prestigious work of art that was intended to convey Wieland's capabilities to special customers? A premium image brochure, as one would say today.

A typewritten supplementary sheet contains the note that the book was damaged by fire and extinguishing water during the Second World War. Probably during the great bombing raid when 750 Allied aircraft flew on Ulm on 1 March 1945. In less than an hour, not only large parts of Ulm, but also 80% of the Ulm plant of Wieland Werke AG had been destroyed.

It is not known who’s attentiveness and interest led to the salvage of the badly damaged catalogue from the ruins. What is certain, however, is that this person already then had the same feeling that grips today's observer: glamour and glory, destruction and devastation encounter each other in this artefact. At the same time, the rescue and safekeeping of the work convey the hope and energy that had Wieland resurrected from the ruins of the World War after 1945. 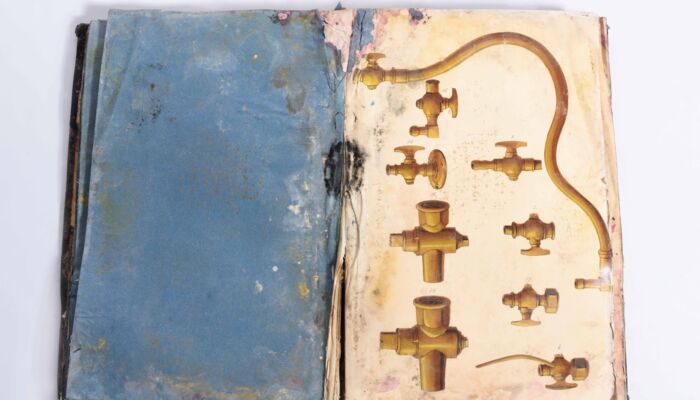 The occasion for which the magnificent product catalogue was produced is not known. The large format, the thick paper and the artistic illustrations are impressive. 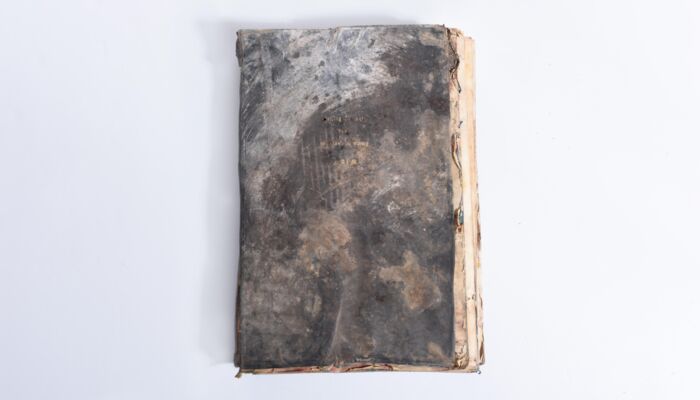 The heavily damaged binding does not give away how splendidly the heavyweight book is equipped. If it contained text, that probably fell victim to the extinguishing water.