A new canteen and bathing facilities opened in Vöhringen in 1908

A testimony in stone to Wieland's above-average social benefits can still be found in Vöhringen today: the canteen building with adjoining bathing facilities. Both are manifestations of a care for employees that went far beyond the norm at the beginning of the 20th century.

As early as around 1890, the Vöhringen plant began to offer possibilities for personal hygiene. An extension to the metal magazine of the rolling mill housed four shower cubicles, even with steam-heated water supply. From 1897, the water was heated by waste heat boilers, which recovered the heat from the melting furnace – an early example of the sustainable use of energy!

Initially, the workers still had to take care of their own physical well-being, primarily by bringing along cold food. This changed in 1899, when not only more washrooms were created, but also a canteen measuring around 200 square metres was set up. Just a few years later, the small kitchen of this canteen was no longer able to cope with the large number of then over 600 employees.

In 1906, a plan was drawn up to construct a spacious building from scratch to accommodate both a bathing facility and the canteen. This was surely not only motivated by the care for the workers, but also to steal a little of the thunder coming from the increasingly influential trade unions.

The impressive new building was erected in 1908. The bathhouse was taking up the entire basement, with 11 bathtubs, 23 shower cabins, a waiting room, and a first-aid room. Who may use the facilities and when (exclusively after business hours!) was regulated in detail. A novelty was that also family members were included. The tradition of heating the water with waste heat from the foundry was maintained.

The canteen, which had separate rooms for employees and managers, offered breakfast, lunch and dinner. Lunch consisted of soup, meat, vegetables and bread and cost 40 Pfennig, about an hourly wage. For those who did not like this, facilities for warming up their own food were provided.

On Sundays, the dining room with its extraordinary windows served a completely different purpose: due to the lack of a church, the Protestant congregation of Vöhringen held its services there until 1934. 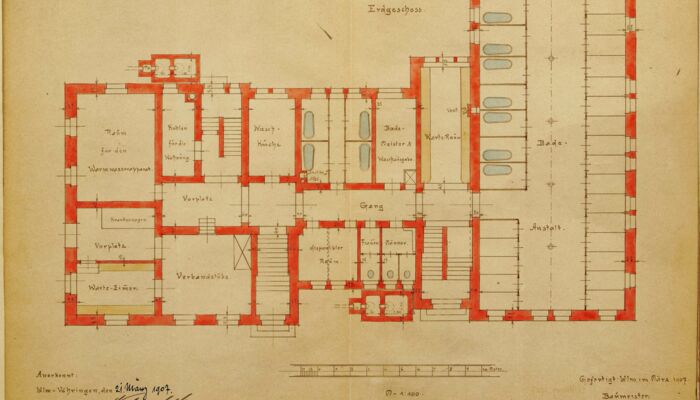 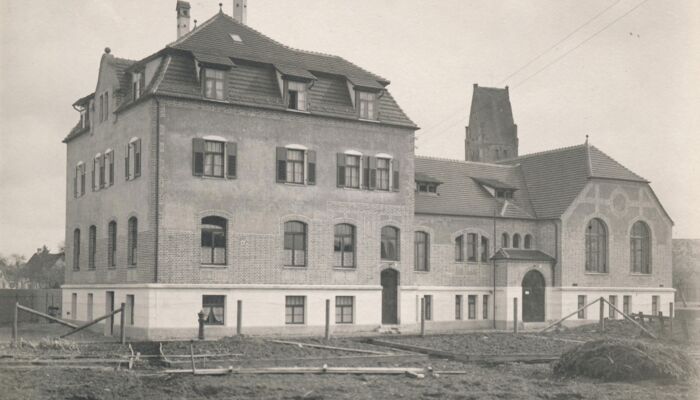 The building of the bathhouse and canteen is already finished, in the foreground the outside facilities are just being created. This undated photograph was probably taken in 1908/09.